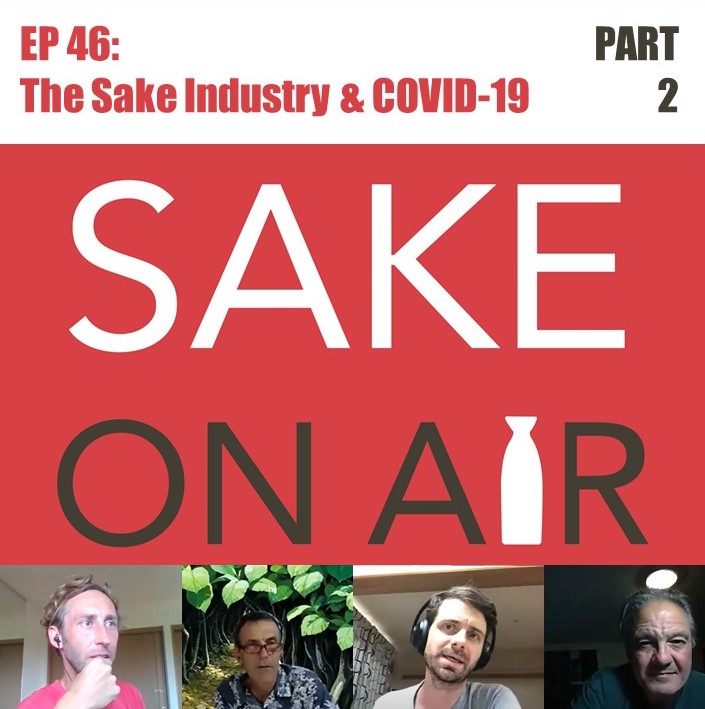 Thanks for tuning in to Part 2 of our special focusing on the current impact of COVID-19 on the sake and shochu industries. If you haven’t yet listened to Part 1, where we interview a number of significant individuals with unique perspective on the industry here in Japan, that’s a great place to start. You can find that here.

Slightly different from Part 1, this particular recording is more discussion-based. This time around several of your regular Sake On Air hosts, including John Gauntner, Sebastien Lemoine, Christopher Pellegrini, and Justin Potts, share anecdotal insights from their own experiences over the past several months. While our experience is by no means any be-all-end-all “official” word on where things stand, we hope that it will contribute further perspective, as well as provide some additional food for thought.

In addition to the impact of COVID-19, we also touch upon the serious flooding that has battered the Kyushu region throughout the month of July, only adding insult to injury in already incredibly trying times. This is impacting the livelihoods of the locals, as well as producers across both the shochu and sake industries.

If any listeners are keen to donate and contribute to the relief efforts still very much underway, please contact us at questions@sakeonair.staba.jp and we’ll be happy to provide you with a few potential options. As all of these activities and the information related to them are being conducted in Japanese, it makes it hard for the international community to support. If you’d like to help, let us know how we can help you.

While all of us in Japan are now generally free to roam at this point, this particular conversation took place online, with John joining us from the U.S., where he’s been grounded since the early days of all of this, Christopher and Sebastien joining us from their respective locales in the heart the Tokyo metropolis, and Justin tuning in from his home Chiba countryside.

For this conversation, do feel free to pour yourself a glass or two of sake or shochu (or both) and settle in with us. After the show, we’d love to hear from our listeners about their experiences over the past several months all across the globe, so do feel free to reach out to us on Instagram, Twitter or Facebook at @sakeonair, or mail us at questions@sakeonair.staba.jp.

Thanks so much for joining us across this special two-part series. As this is an ongoing challenge affecting everyone, we’ll very likely revisit this topic again six months or a year from now. While the hurdles to overcome are high any many, we’re all guaranteed to learn a lot through this process together. We look forward to helping keep you informed along the way.

We’ll be back to our regular programming in two weeks.
Until then, Kampai.

This week, we’re bringing you a double episode exploring the impact of COVID-19 on the sake industry here in Japan, and how that impact is beginning to reverberate through the international market.

The entire nation of Japan, while never undergoing a formal lockdown, was officially placed on State of Emergency status as of April 7th, a state which continued until May 31st, with the country gradually easing restrictions in phases over the several weeks that followed, leading to a complete reopening on June 19th.

During this period, restaurants and izakaya were requested to limit their hours of operation from 5am to 8pm, while closing all alcohol service by 7pm. This, combined with the request for the entire population to refrain from unnecessary travel, as well as shift to teleworking in all instances possible, transformed how people shopped, dined, and of course, accessed and consumed sake and shochu. As you might have guessed, for many breweries, wholesalers, retailers and restaurants, sake and shochu stocks became largely idle for months on end.

While sales numbers have been gradually recovering since June, the number of people testing positive for COVID 19 have also been on the rise as of late, with Japan now experiencing what at this stage might be considered a “mild second wave.” As a result, dining establishments have again been asked to curtail their hours of operation for the month of August, closing by 10pm, with particularly dense dining and entertainment districts in parts of Osaka being asked to cut back their hours of operation even further.

These front-line sales tend to get a lot of attention, however it’s the beverage’s deep agriculture ties, along with the particular timing of the pandemic which might result in a truly devastating fallout down the road. We discuss this as well.

To be honest, there’s still a lot that we don’t know. The impact from the past 6 months isn’t truly going to manifest itself for some time to come, and how the pandemic will develop both in Japan and internationally is, at this point, still anybody’s guess.

However, we do feel a responsibility to sake lovers around the world to share what it is we do know, which is why over the past couple of months we’ve been conducting a series of short interviews, as well as discussing this reality amongst ourselves, in order to help paint at least somewhat of a picture as to where we stand as of the end of August 2020.

For Part 1, we’ve edited together a series of excerpts from five different interviews that we conducted with individuals here in Japan who are in a position to offer particular insight into the impact COVID-19 on certain pockets or channels of the sake and shochu industries. Our guest include:

When you’re done with this episode, Part 2 is already live, so you can jump over and continue this exploration whenever you’re ready. For Part 2 we bring your regular hosts Christopher Pellegrini, John Gauntner, Sebastien Lemoine, and Justin Potts together to anecdotally discuss the experience of the past six months. We hope you’ll find it to be an interesting supplement to the first-hand perspective provided in this episode.

Between this and Part 2, we’ve left you with a lot to digest over the next couple of weeks. There’s still a long road ahead, but we’ll be in it for the long haul. We hope you’ll stick with us. If you’re looking for a great way to support, there’s always one: